The written and visual artworks compiled in this booklet were entered in the 2022 Winter Olympics Literature and Visual Arts competitions. The theme for the Olympics is also the theme for the entries: "Winter Lights."

From the Grey Area

Come the time winter grinds away
All memory of the not-winter time
And even of winter's first delights
Of days of novel cold and huddled nights
Leaving only dread to sprawl across a self
Dwindled to small shelters to endure.
False spring comes, a few fancies of freedom
Coming to new slush become new ice crusted now over
The fear the fluke was not feted enough.
A second falser spring does stay
Only warm only long enough to make the true warmth farther away.
Then the far forgotten sun, they say,
Sends great storms at greater speeds
Into the magnet that holds the world
That crash the air that holds the world's life
That cause a cosmos-light that comes to the mundane.
Not knowing where to find the hope
To see whether the clouds are in the way.

Every night, lately, I look for Christmas lights.
I took mine down from the shrubs weeks ago,
So now on my evening walks I seek out neighbors
Who were less bound by propriety.
I walk further and further to find the few still left,
Make mental notes of where to come back,
But the hard broken part of winter is outlasting them one by one.
Often I come to a house that had been a favorite
Still glowing a week ago, two nights ago,
And it is dark.


Usually I say: no good thing endures.
But tonight I tell myself: no good thing overstays.
I imagine that goodness itself made a bargain
With the indifferent hand that flips every switch,
Saying, "You will extinguish all my children
And they will bear it, because in return
Every night terror must also end.
Every evil will fall into the snow and be lost."


I come to the tree, still lit,
Look at it,
Turn around,
And walk home with my face frozen.

A Momentary Glance into Someone's Life During the Olympics

“NyaaaaAAAAH! Why are we so BUSY??”

The shrill scream broke out in the middle of the day, centred on a restaurant to the east of St Marin’s; The Sakura Nebula, manned most of the time by a trio of diminutive cat people known as Felynes. Making the fuss was Fee, the youngest of the three and the establishment’s delivery girl. “That’s the seventh order this morning! I’m bushed!” She griped. “You’re tired?” shot back Poko, her brother. “Try being in front of a stove for eight hours. I think my eyebrows got singed on that last order.” It had been a busy few days. With the Olympic events and ever-present exam season in St Marin’s, people always want hot drinks, and hot meals after exertion in the snow. … or a somewhat hotter, often stronger drink after an equal amount of time trying to make sense of a professor’s exam questions.

“What’s the boss up to, anyway?” Poko asked. “Trying to win a couple medals in between working on one of those special order projects” supplied the third of the trio, Tempo. He manned the bar, making the various drinks, sauces, and managing most of the managerial duties. “And how is that going, anyway?”, prompted Poko. There was a pause, followed by a distant noise. “……aaaaAAAAAAAAHHHHHH*CRUNCH*” With a loud splintering noise, a paintbrush lodged itself through the wall, accompanied by an airborne cat. Mako wrenched the paintbrush out of the wall, and it mended itself as she stalked off, muttering. “… does that answer your question?” asked Tempo, dryly. “Ah, still working the kinks out of the process.” Poko nodded.

The trio gathered, as they tended to, on the balcony of the tower in which they lived, after a day’s work, to relax, and have a meal. This night, they had an additional show: Via a crystal screen, they watched people paint the night sky – literally in some cases, digitally in others, and in one case, displaying on it the darkness of the abyss. “There’s always something going on here…. Gotta give them that!” “Well, it’s what helps keep us busy…. And there’s always beautiful lights in the sky.”

Shadows of Concern in the Night

Lightly dusted in snow from treeline to far grassland horizon, the industried city calls out its location to the night sky with the smattering of coloured lights strung along the structures in combination of street lights and billboard illuminations. Households bearing wider variance in colour and precision of installation, trees glittering with their sway in the night wind.

Standing tall over the great river that splits the town and its industries, the old stone and iron bridge flickers with the strings of lights lashed to its span.

Beneath the gaze of the planet's paired moons, the night cracks loud with the warship's exit from voidspace and into the settlement's airspace. Air raid klaxons below spool softly into gutteral alarm, while portions of the city fold into the optimistic safety of darkness. The warship's flanks bristle with launcher tubes springing into readiness, half dozen missiles riding streaks of exhaust glow as they begin their race for critical infrastructure. 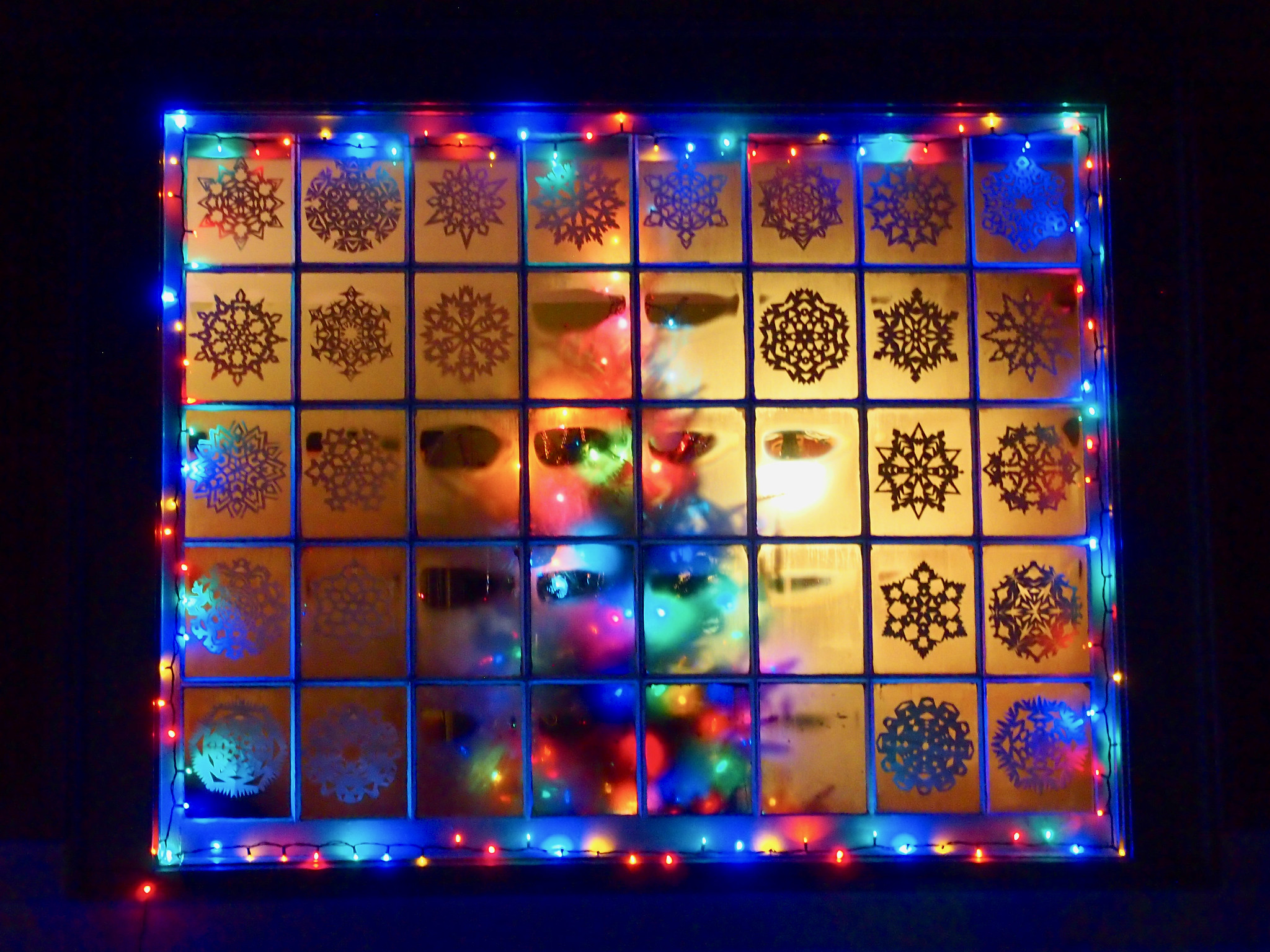 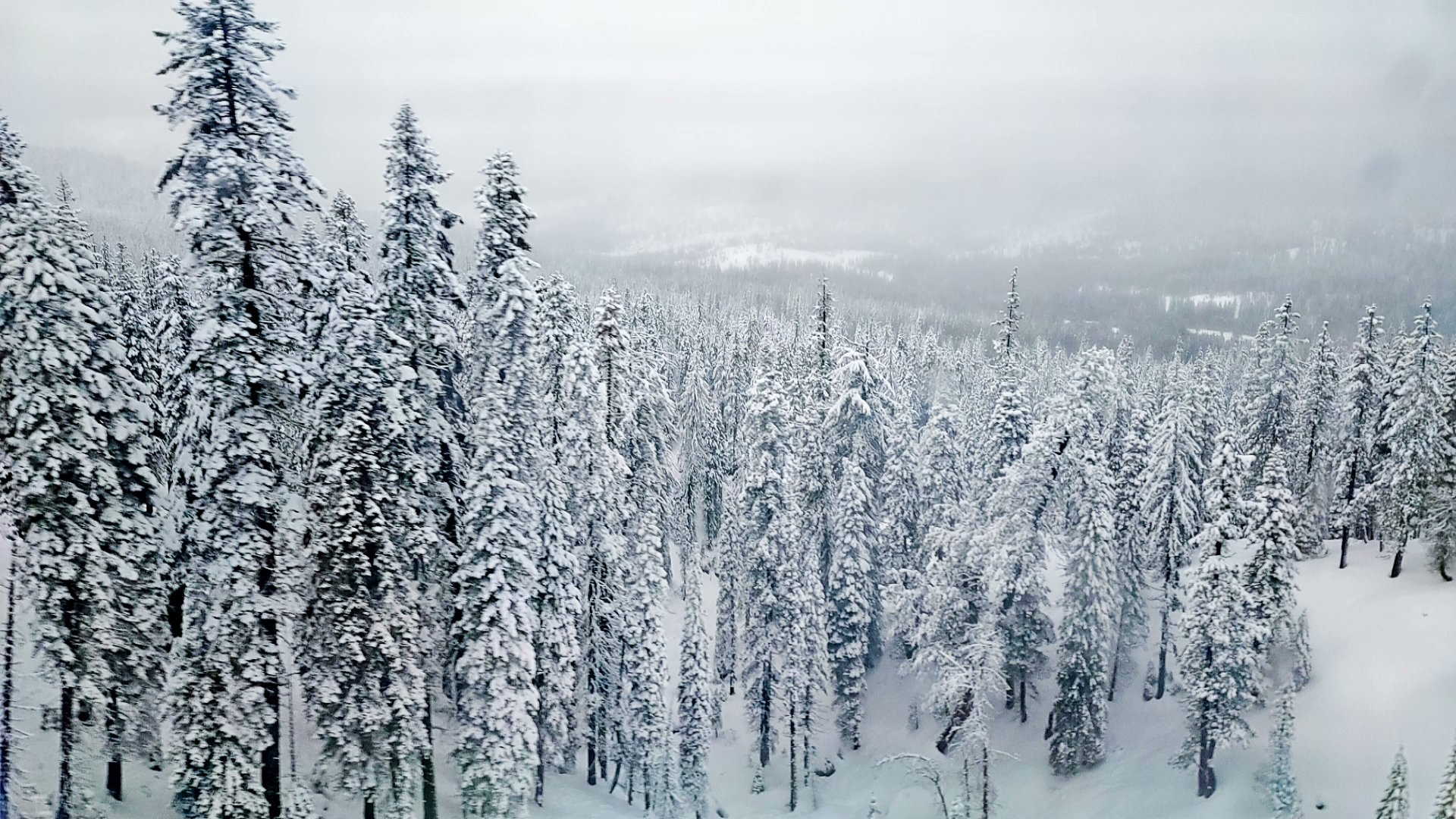 "Mountains by Train," by Gwen 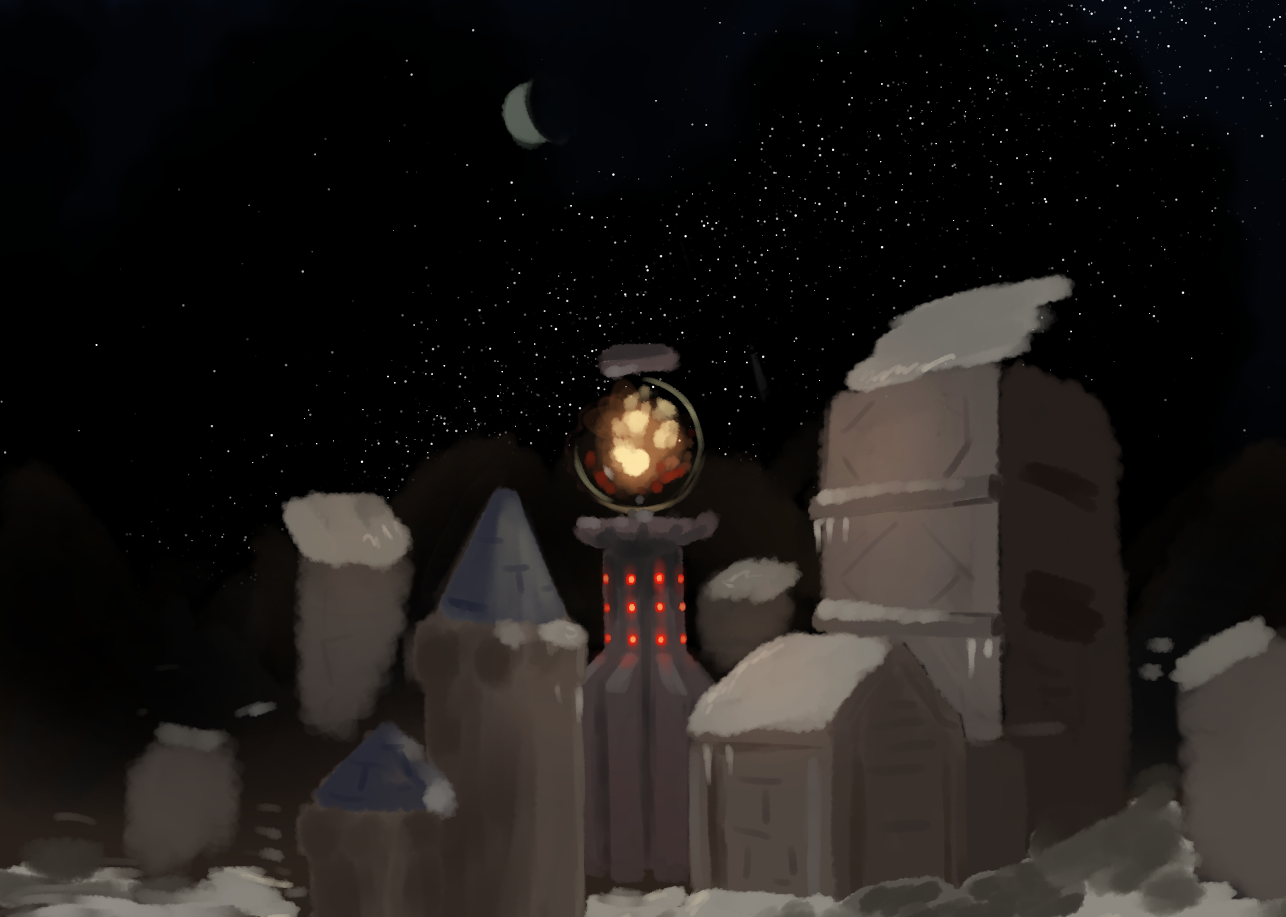